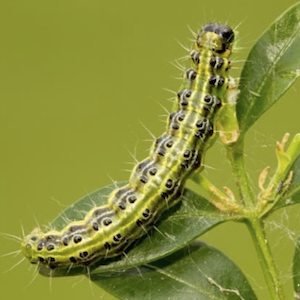 Box Tree Caterpillar: What is it? And what can I do about it?

I have a number of clients who have plants that look like this (insert picture of brown shrub) and I have lost plants myself because I didn’t work quickly enough to stop the spread.

Box tree caterpillars were first found in gardens in 2011, although the adult moth was first seen in Britain in 2008. By the beginning of 2015, box tree caterpillars and moths had become established in London and surrounding counties and is now spreading further. Because the caterpillars cause severe defoliation, it is likely to become a serious insect pest problem. It is often confused with box blight; (a fungal infection), but if there are cobwebs in your shrub and the leaves are stuck together then you have the moth.

The adult moth normally has white wings with a brown border, although they can be either clear or completely brown or clear. Female moths lay pale yellow eggs in a sheet on the underside of the leaves. The caterpillar is green with black and yellow stripes along its body. The moth is active from April to October and will have many generations in a season.

In winter, small caterpillars hibernate in an envelope of two box leaves that have been spun together the previous autumn.

Wherever practical, remove the caterpillars by hand, or prune out stems covered in the webbing and caterpillars and destroy.

Spraying with an insecticide may prove useful in their control – a thorough spraying is needed to penetrate the webbing; and spraying every two weeks may be needed to break the life cycle. But it will be deadly to any insect as well as beneficial ones; so worth careful thought if you are attracting insects into your garden.

Once treated remove any damaged foliage, and feed and water the plants well.

Prevention: If you have not yet been affected and want to protect your precious box hedge, then there is a pheromone trap for biological control: It captures the moths and therefore prevents further egg laying. The trap should last for 3 months.

As part of their research the RHS would like to know where box tree moth has been seen.

Please submit your records via their on line survey http://apps.rhs.org.uk/surveys/submitrecord.asp?type=9survey

If it is all too late and you have lost the fight; but you still want the clipped hedge or topiary ball look an alternative hedge or topiary plant can be used. Ongoing trials of a variety of compact, evergreen shrubs at RHS Garden, Wisley are showing promise as alternatives. The following all have relatively small leaves and can be clipped into formal hedging styles: