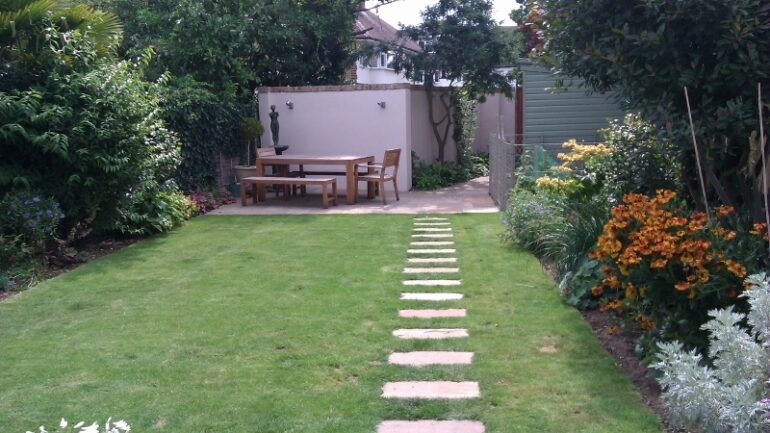 A contemporary twist to a Victorian garden

My client had an unstructured garden with an unwanted trampoline, an ugly and crumbling wall on the boundary a brick wall hiding a neighbour’s garage in full view of the kitchen had an old and damp shed base that was unappealing and an eyesore. A parking space at the rear of the garden meant that the damp and uneven path was used on a daily basis.

The client wanted to transform the garden into something that had a clean and modern look, but also reflected the age of the house. Key to the new garden was a shed for storage of garden equipment and family bikes. A vegetable garden that was dog safe was also a desirable feature.

The crumbling wall was removed and replaced with a new rendered wall near the house to create a court yard feel outside the French doors. A close board fence was erected for the rest of the boundary. The ugly end of garden wall was also rendered, both walls were capped with bricks to match the house.

A new lawn was laid at an angle to the house, leaving more interesting asymmetric beds, for an array of new and interesting plants, and making room for a wrought iron fenced vegetable garden in the sunniest spot.

New patio was laid to create a dining area at the bottom of the garden, and the patio was extended to the rear gate giving a light and even surface to walk on and for the new bespoke shed.