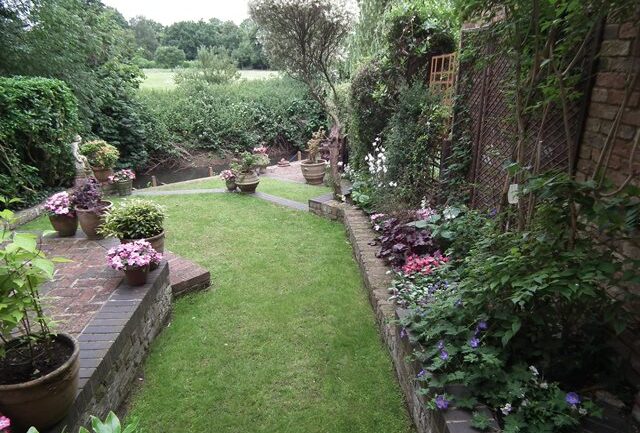 Riverside Planting, for year round interest.

Planting for a Riverside Garden.

A small terraced garden with riverside planting overlooking the River Wey. The client wanted to improve the border running along her neighbour’s fence line as well as have some permanent all year round interest for her pots.  An extension had recently been built next door, which led to the uninteresting sight of a very tall brick wall, as part of the boundary. There was also a gap in the boundary hedging further down that allowing them to see straight into the neighbour’s garden. There was a tired hedge of Viburnum tinus which was taking up valuable planting space, and not adding any value to the garden. The client had many pots that she loved to put bedding plants in during the summer, but these were often empty during the winter months.

The solution – To give an increased feeling of space near the house and to add interest to the wall, we suggested taking out the Viburnuma Tinus hedge and put in a variety of climbers. Overtime they will create a green screen and hide the wall but also add all year interest. In addition; we placed a large trained Pyracantha and a trained Ceanothus to fill the gap in the fence. This provided evergreen privacy from the neighbours. We filled the beds with a mixture of evergreen and deciduous herbaceous perennials that would create all year round interest. We chose plants from our client’s favourite palette of pinks, purples and whites. All the plants were chosen for their hardiness, as on rare occasions the bottom of the garden would flood for a short period of time.

For the half of the pots we chose a mixture of evergreen shrubs and winter flowering plants like Edgworthia Chrysantha that give off plenty of winter interest. We left the other pots empty so that they could be planted with new bedding plants with each season. The borders and pots all looked lush and full when it came to summer.