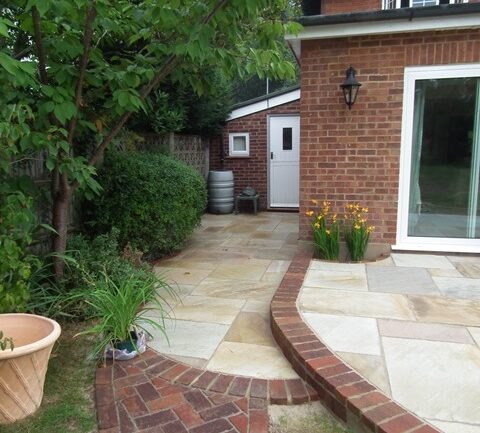 A New Patio for a New Extension

The impact of an extension on the garden.

This project was in large garden situated in Sunbury. The client had recently had a large extension which gave her new patio doors facing out into the garden. The client felt the old patio; which was uneven crazy paving was impractical for her needs. The patio was too narrow and finished half way across her patio doors. The rest of the patio extended too far into the garden, giving the impression of being long and narrow.  The side path to the garage was crowded with plants and gave a feeling of being over crowded. The client had recently bought a beautiful new Victorian greenhouse that was part way down the garden, but there was no path leading to it.

The Client wanted to create more of a cottage feel to the her garden, where she could have plenty of space to entertain and to have ample room for her many plants. We needed to design a new patio for the new extension, that wrapped around the house, wider and shallower than before, but in keeping with the scale of the house and garden. We chose tumbled fossil mint sandstone, edged with red brick shalbourne pavers. Large sweeping curves were used  to compliment the cottage feel of the planting scheme and rest of the garden.

We also created a winding herringbone brick path leading from the patio to her well stocked green house. To ensure that the large patio could be broken up with planting designed small beds inbetween the windows and doors within the patio so the client (being a huge plant enthusiast) could plant climbers to help soften the look of the house.

The over all effect was a large single sweeping patio that suited the new extension. We did not supply plants as the client had many of her own plants ready to go into the new larger borders.